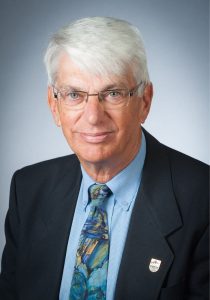 After 13 years on Council, including time as Deputy Mayor, Peter gave up his seat earlier this year to move from Cornwall, PE to Cornwall, ON to be closer to family. Peter recently stated that what he enjoyed most about being on Council was watching the Town grow. During his time on Council, Peter saw many large projects come to fruition including increased development, the construction of the Cornwall bypass, the active transportation trail along Main Street, the reconstruction of the Cornwall Civic Centre, the Terry Fox Sports Complex and town hall – just to name a few.

Peter admits that serving on Council was not always easy, but over the years people have been very kind and it was a wonderful experience. “I really enjoyed the world of municipal government so much because it’s the most basic grass roots service you can offer to residents. Everything starts at the municipal level,” he said as he accepted the award.   “I always appreciated being on council.  There were always new things to learn, new people to meet who had so much to offer and interesting issues to address. It was very fulfilling.”

In nominating Peter, the Town of Cornwall described him as someone who always had the best interests of the Town in mind and tried to see every issue from various points of view. He had passion and was a big advocate in bringing the public transit system to Cornwall. He believed that everyone should have access to reliable transportation.

Peter was also an integral part of building a strong diversity and inclusion presence in the Town. Peter strongly believed that every resident was an important part of the Town and that engaging new residents was key to making them feel that Cornwall was their home.

Both the Town and the Federation are grateful to Peter for his outstanding public service and wish him well at his new home.