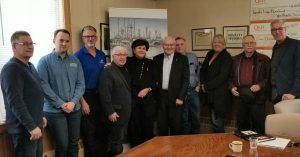 Charlottetown PE – On February 12, members of the Federation of PEI municipalities met with Gudie Hutchings, Parliamentary Secretary to the Minister of Rural Economic Development.  The primary focus of the meeting was the design of the Universal Broadband Fund, which will deliver high-speed internet to rural and remote communities as part of the federal government’s Connectivity Strategy.

FPEIM members emphasized the importance of high-speed internet to the rural economy, public safety, and the quality of life in rural communities, and provided several examples from Prince Edward Island.

FPEIM President Bruce MacDougall and FPEIM members explained the need for the Universal Broadband Fund to be designed in a way that makes it easy and affordable for small municipalities to participate in the program.  Hutchings noted the importance of supporting small municipalities through the application process and thanked participants for their input on the Universal Broadband Fund and other rural matters.