January 19th, 2019 Kinkora, PEI – The Federation of PEI Municipalities hosted their semi-annual meeting at Kinkora Place on Saturday for municipal governments Island-wide.  The meeting also represents a learning opportunity for Mayors, Councillors and CAOs.  This year the topics with guest speakers were as follows:

FOIPP – Freedom of Information and Protection of Privacy Act (FOIPP) and Access to Information had four speakers: 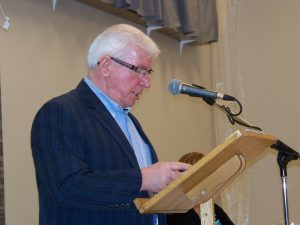 The meeting started with a welcome from Federation of PEI Municipalities (FPEIM) President Bruce MacDougall, Mayor Tina Harvey of the Rural Municipality of Kinkora, and Hon. Richard Brown, Minister of Communities, Land and Environment.

FPEIM President Bruce MacDougall reviewed the past year for municipalities noting, “2018 was a big year for municipalities, with the Municipal Government Act (MGA) having its first birthday last month, replacing the outdated and paternalistic acts.  The MGA provides broader powers for municipalities, balanced with accountability requirements that are similar to other provinces.  Interestingly, PEI was also one of only two jurisdictions in Canada that didn’t give municipalities the power to adopt bylaws for the general welfare of their residents.”

MacDougall was pleased the Federation could offer speakers on important and in some cases complex issues saying, “Affordable housing is an area where municipalities are playing a bigger role, while access to information and protection of privacy is new to municipalities and changing weather patterns are making municipal emergency preparedness planning and response more important than ever. We only have to look back to opening of warming centres last month as an example.”

The Federation of PEI Municipalities established in 1957 as a unified voice for Prince Edward Island Municipalities.  For more information visit www.fpeim.ca call 902-566-1493, or email: info@fpeim.ca