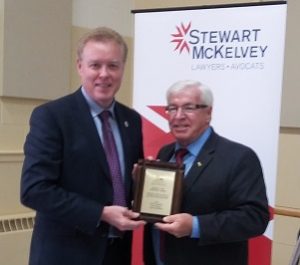 April 29th, 2019 – Charlottetown, PEI – The Federation of Prince Edward Island Municipalities (FPEIM) held their Annual General Meeting in the Rural Municipality of St. Peter’s Bay.  As part of the 62th Annual Meeting, the Federation of Prince Edward Island announced the winner of the Bruce H. Yeo Award – David Dunphy, former Mayor of the Town of Stratford.

In presenting the award MacDougall noted that, “A true community leader, former Mayor Dunphy was instrumental in making Stratford the safe, inclusive, sustainable and the growing town it is today.   Former Mayor Dunphy worked tirelessly on hundreds of projects such as creating a skatepark for youth in 2018 and securing a high school for the Town of Stratford.”

Councillor Gail MacDonald nominated Dunphy for the award, saying, “His leadership ability was paramount to governing the town with a team effort and he ensured all councillors had a voice around the table.”

The Federation of PEI Municipalities is committed to representing member municipalities as a strong and unified voice and to fostering effective, efficient and accountable municipal government in Prince Edward Island.  For more information on FPEIM please visit fpeim.ca.